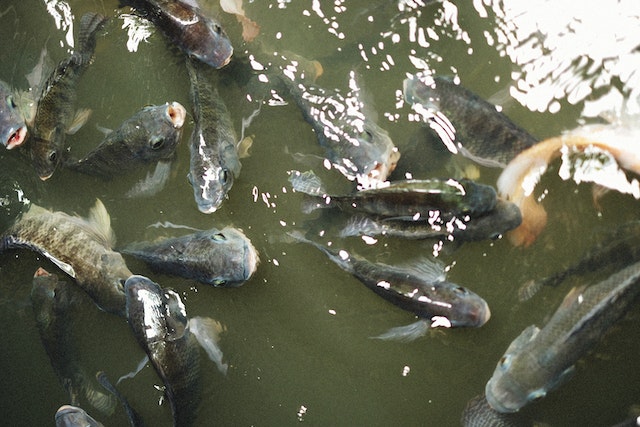 A carp “plague” has descended on flood-hit parts of the Murray-Darling Basin, creating headaches for farmers and concerns about the impact on native fish.

Dairy farmer Heather Campbell, who manages about 200 cows on a property at Cohuna in Victoria’s north, said thousands of dead juvenile carp were rotting in her paddocks following widespread flooding.

“I have a really poor sense of smell and I can smell it. So that must mean it’s really bad,” she told AAP.

“I’ve got no idea how long it takes to clear what’s effectively a carp plague out of the system. It’s not just at our end; it’s through everywhere and it’s going to get into the Murray River.”

Ms Campbell said the carp got into the irrigation system, with nearby properties in the Victorian/NSW border town now dealing with the same problem.

“The scale is just so much more than we’ve had before. In the past, we’ve had a few fish, not a few thousand, every time we water a paddock,” she said.

The carp are appearing in waves and Ms Campbell is concerned her dairy cows could be exposed to botulism or other diseases by eating the decaying remains, potentially killing them or affecting their milk.

“Cows aren’t meant to be fed any animal material at all,” she said.

Ms Campbell plans to erect temporary fencing around the dead fish to keep her cows clear but expects the “feral” stench to worsen ahead of a streak of 40 degrees Celsius days forecast from Thursday.

The October floods caused a large carp breeding event in creeks and rivers across much of the southern Murray-Darling Basin, according to the North Central Catchment Management Authority.

“The timing of the floods late in the season meant adult carp were more active in New South Wales and Victorian waterways, and bred more than if the flooding had been earlier,” it said in a social media post on Monday.

Carp are known to reproduce in floodplains, with their larvae and juvenile fish dispersing and migrating back to main waterways.

But not all make it.

“It is common for large numbers of these fish, particularly juveniles, to be stranded on the floodplain where they die,” a Department of Energy, Environment and Climate Action spokesperson said.

Authorities are urging farmers to move livestock away from areas with decomposing fish and provide alternative drinking water if dams and other sources are contaminated.

Only when the dead fish are removed or fully decomposed should livestock be re-introduced to affected land.

The population boom could also lead to the pest fish spreading further into the previously carp-free upper reaches of the river system, the Invasive Species Council said.

Darryn Clifton, who lives west of the NSW outback town of Menindee, stopped to film thousands of carp swarming the Main Weir on the Darling River on Sunday.

He’s in the area every week and keeps an eye on the flooding as a vice president of the Darling River Action Group.

“I just couldn’t believe the amount of carp that were in the shallows. There were just masses on masses of juvenile carp trying to get up river,” Mr Clifton told AAP.

“(The government) has got to really come up with something significant that’s going to eradicate them and leave our native fish to prosper.”

Peak floodwaters may still not have reached Menindee and are tracking along the Murray River into South Australian communities, impacting about 3400 properties in the state.